First turns of the season 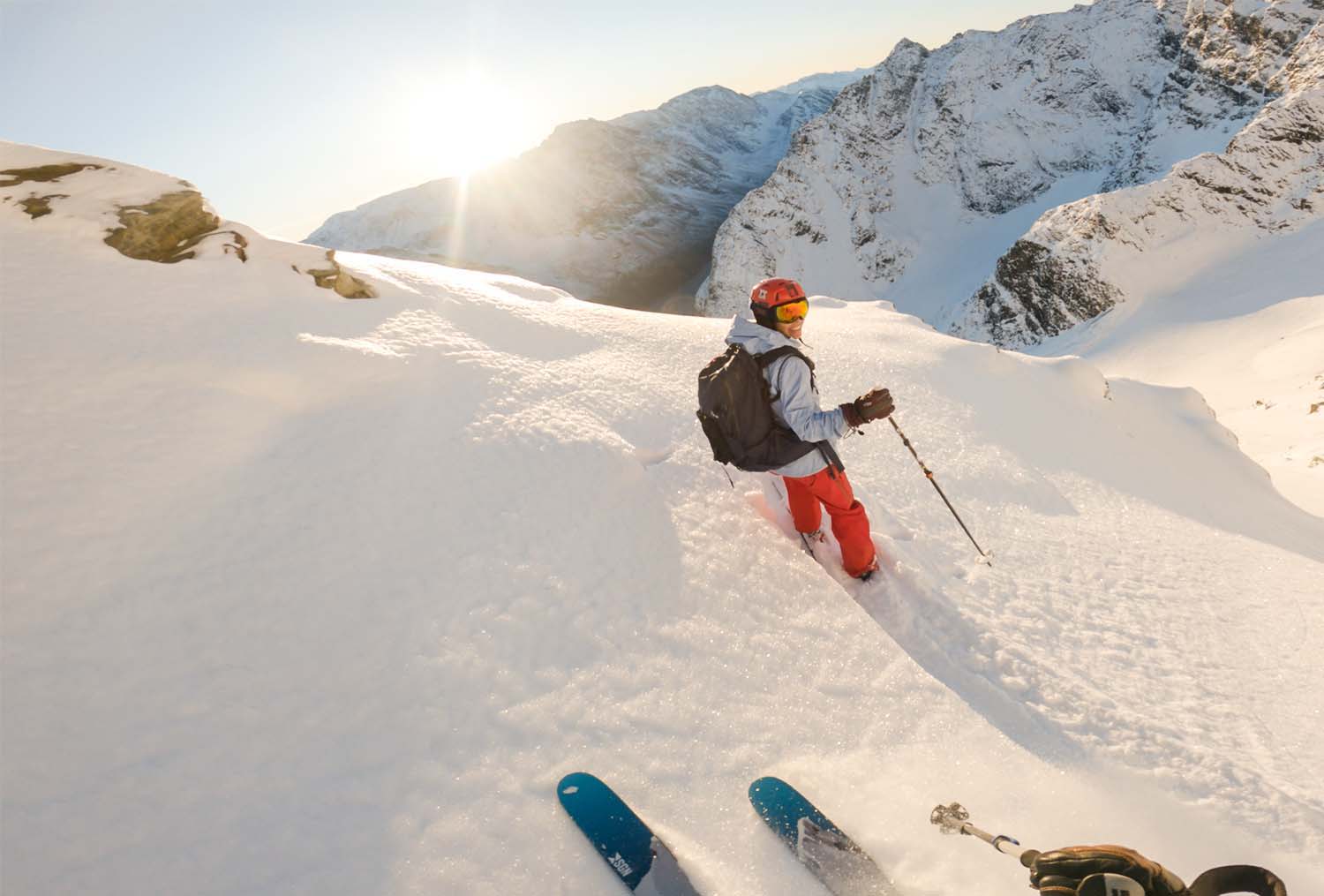 Stoke is high for the first turns of the season

Autumn, winter, spring, summer, four seasons, each with its own charm. In Northern Norway, there are no guarantees to what each season will bring. In fact, the winter extends over at least three of them, you can actually ski all year round if you want. Last season, I had my first day of skiing in October, and my last one in June. That means 9 months with stinky ski boots on.

Autumn is the time of the year when the people in Northern Norway prepare for the darkness to come. Slippery roads and just a few glimmers of light, which you'll probably miss while you're at work. For many, a rather depressing period. But it is also the time when rain in the city means snow in the mountains. It's the time when the mountains slowly but surely change colours and dress in white. The atmosphere in Tromsø is vibrating, who has taken the first turns? And where? Ski pictures are starting to pop up on social media, and the hunt for powder has begun. FOMO, that familiar unwelcoming feeling, is back to stay for a while. You try to take comfort in the fact that the winter is long, but the hunger for skiing is overwhelming. 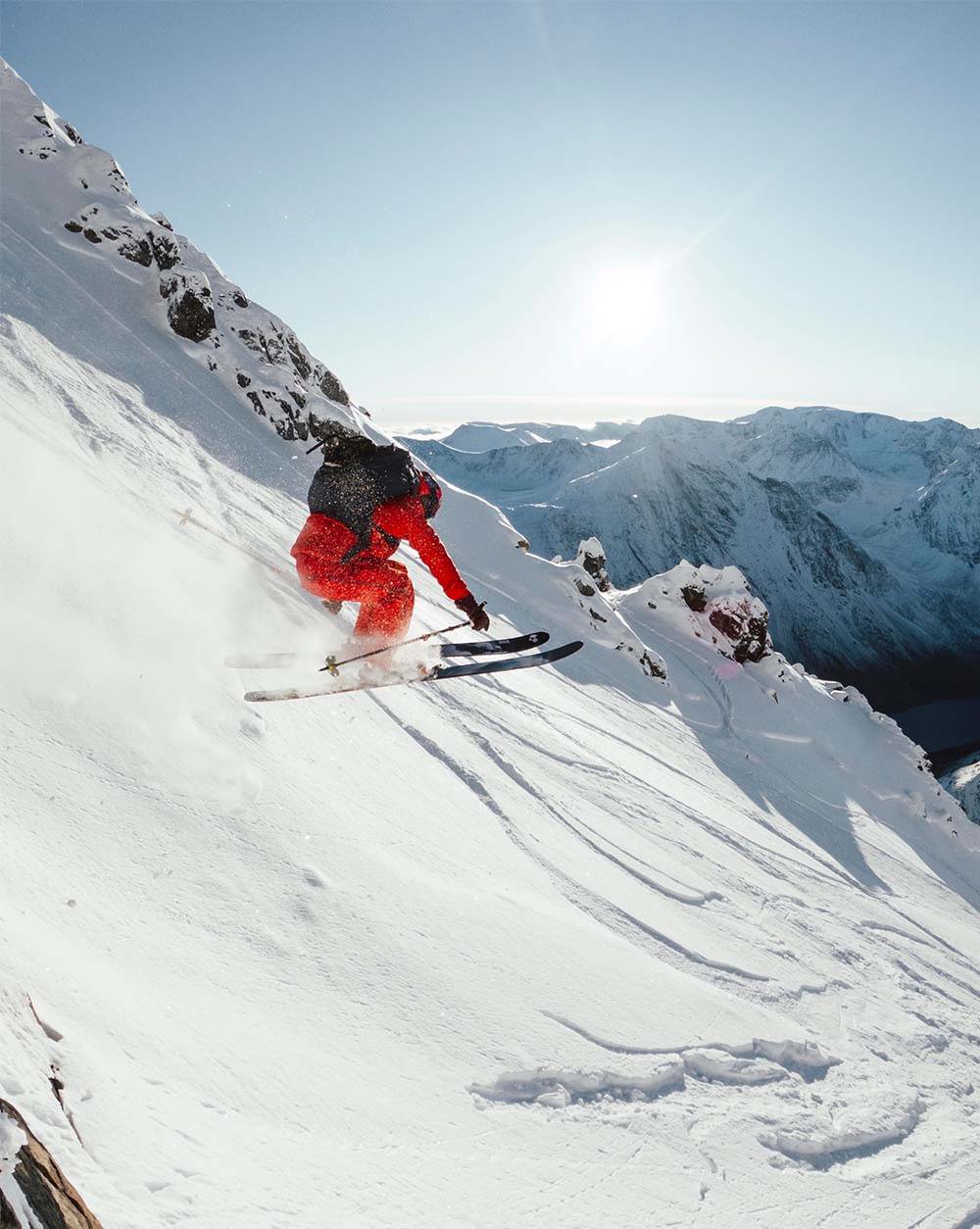 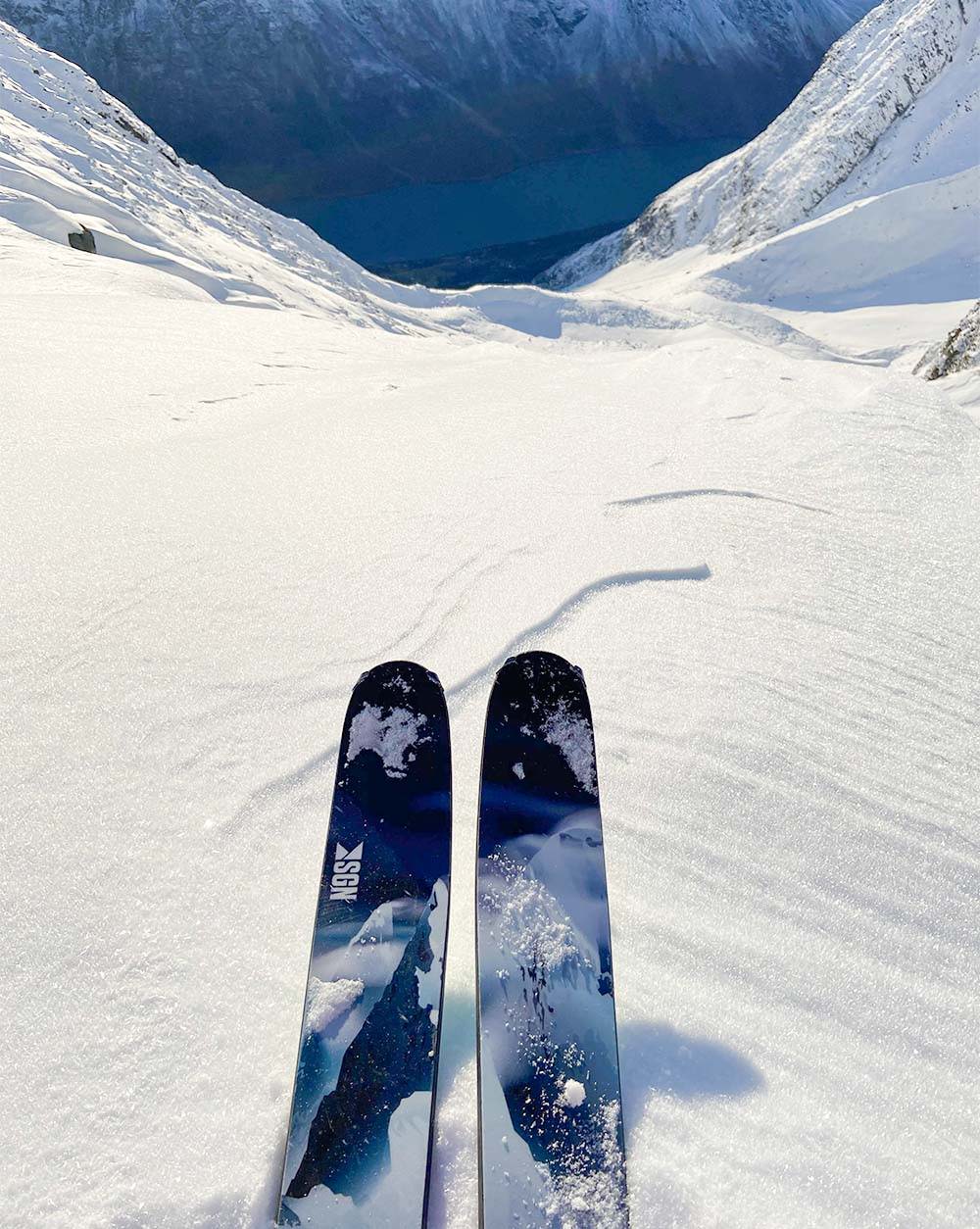 Merrick trusting her Soleitind 175 for the first turns of the season
Left photo: Thea Røhme

The forecast reported three days of blue skies, and rumours told us that it would be dry snow in the high alpine. Let's go! Nikolai, Thea, Merrick, and I (Emma) prepared our ski bags and packed the car for Store Kjostind in the Lyngen Alps. A well-known place for early season turns that are made possible because of the tiny glacier that forms a solid base. The mountain is 1488 meters above sea and located about 5 km west of Lyngseidet. Its ambience is similar to that of Chamonix without the number of people.

Last season, I had my first day of skiing in October, and my last one in June. That means 9 months with stinky ski boots on.

Merrick has a skype meeting in the car on the way out, at the same time as she organizes someone to pick-up her children. I've been given spontaneous free from work, and I'm trying to arrange a car that has to be moved before we can leave. Nikolai is speaking to a partner about some work that has to be done, and Thea has worked extra to be able to take some time off. We all did what was needed to get some of the early season bliss. Skis, poles, helmet, shovel.. how was it again? Poles. Niko, did you bring your poles? "Damn, I left them at home". Social and solution-oriented as he is, he jumps off to a couple of Swedes in the parking lot, who happily offers him a pole. The other one he makes up from a wooden stick. 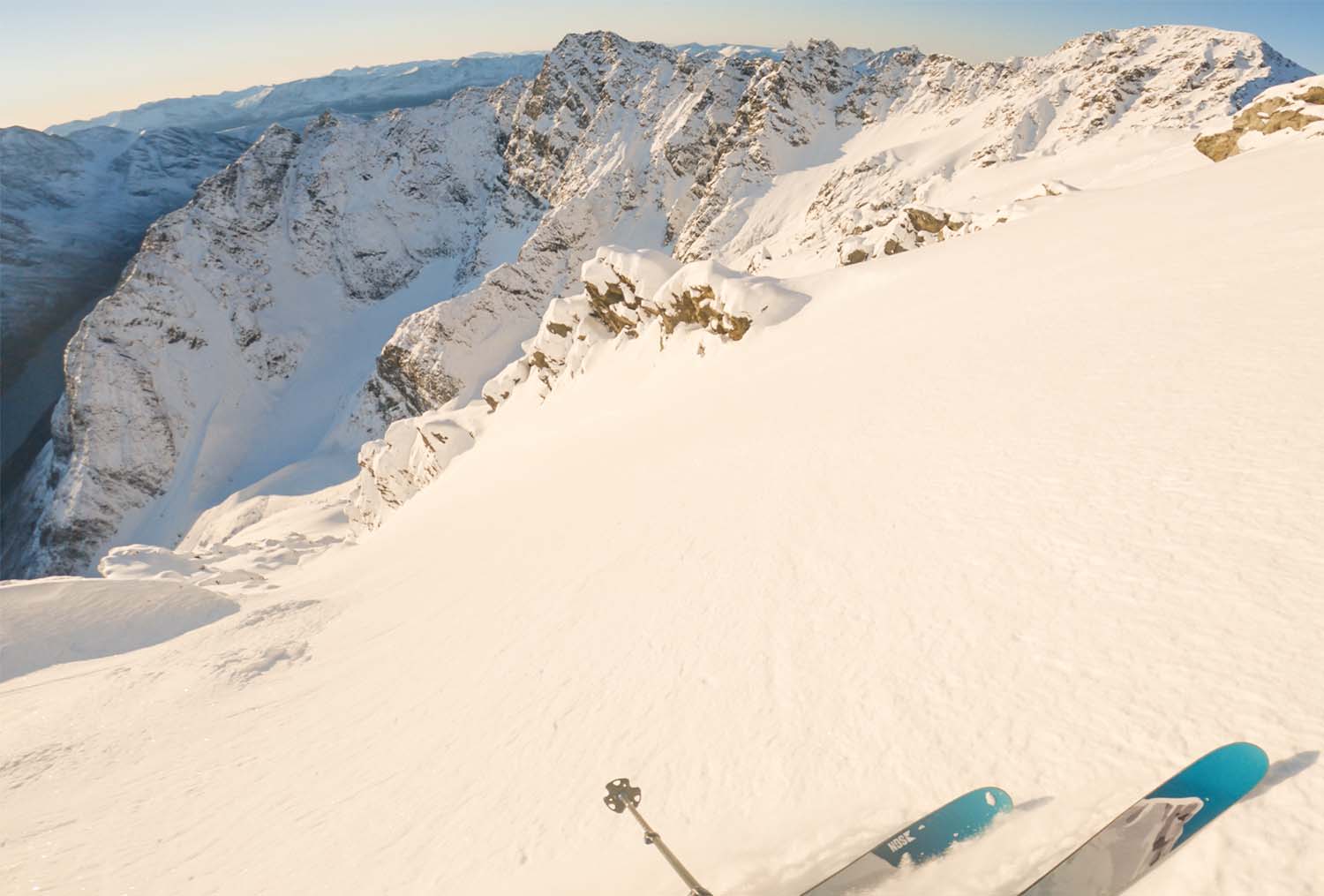 Pre-season. Everything is a bit chaotic, but the stoke is higher than ever. Skiing in October often means that you have to gain a lot of height on your feet before you can strap your skis on. The backpack feels way heavier than last winter, and what happened to my leg muscles? All the walking could be for "nothing" if you didn't plan it right. Expectations are low, but hopes are sky-high. According to Instagram, at least 20 skiers from Tromsø were here a few days ago. Maybe the chance for untracked snow is all gone?

Of course, the most accessible skiing was already harvested, but only a few meters of extra booting - JackPot!. "This is completely crazy, it's like we are in the Alps!" Thea shouts while she whizzes down the couloir.

And there it was again, the feeling of euphoria. Skiing in the sun, in dry snow, with a handful of wonderful people that you care about. Burning, unaccustomed, ring-rusty muscles and screaming feet are all forgotten, and it all is worth every drop of sweat. Three to four turns is enough, life feels like it should, the way you always want it to feel. There is not a place on earth one would rather be, on a sunny day in October. 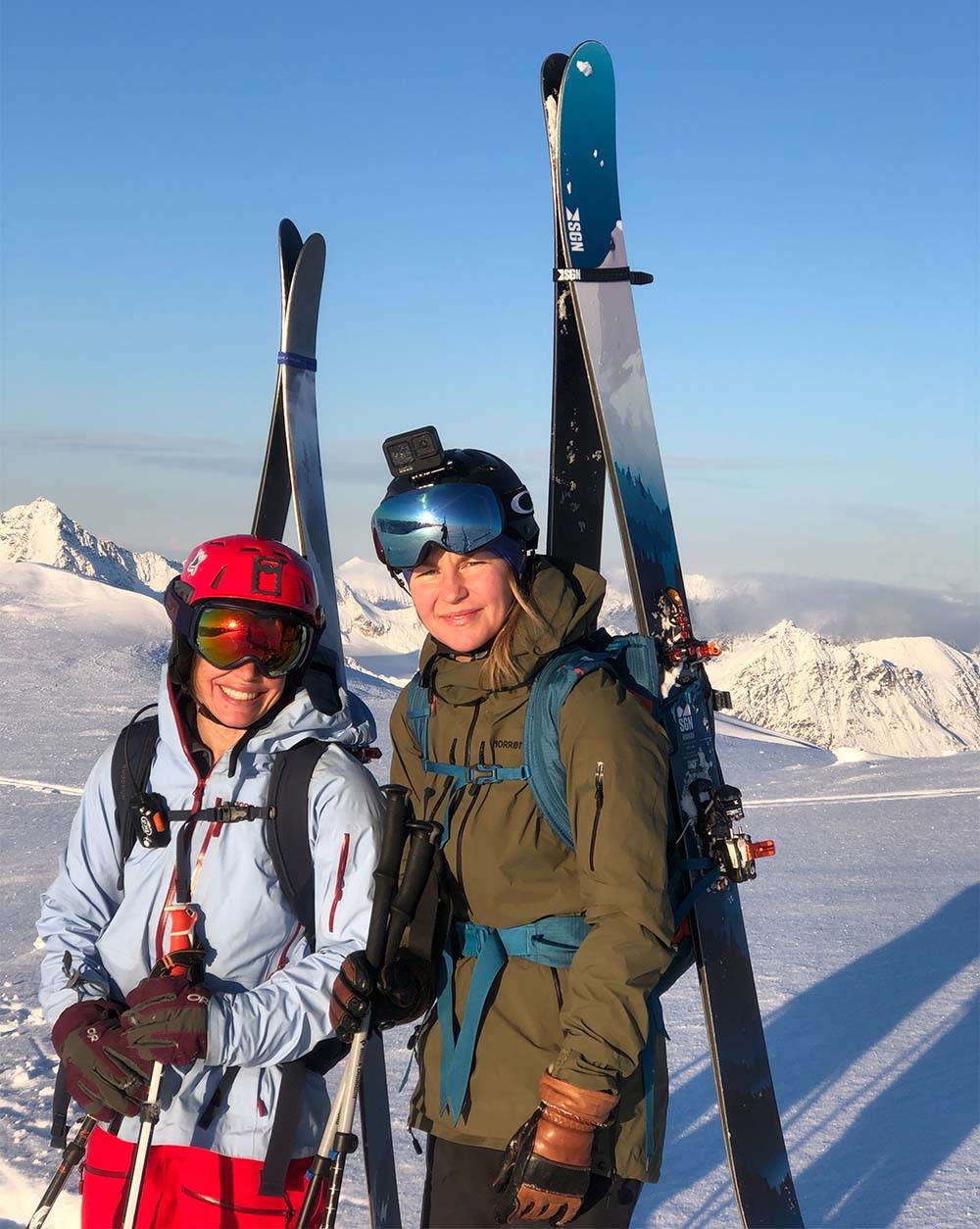 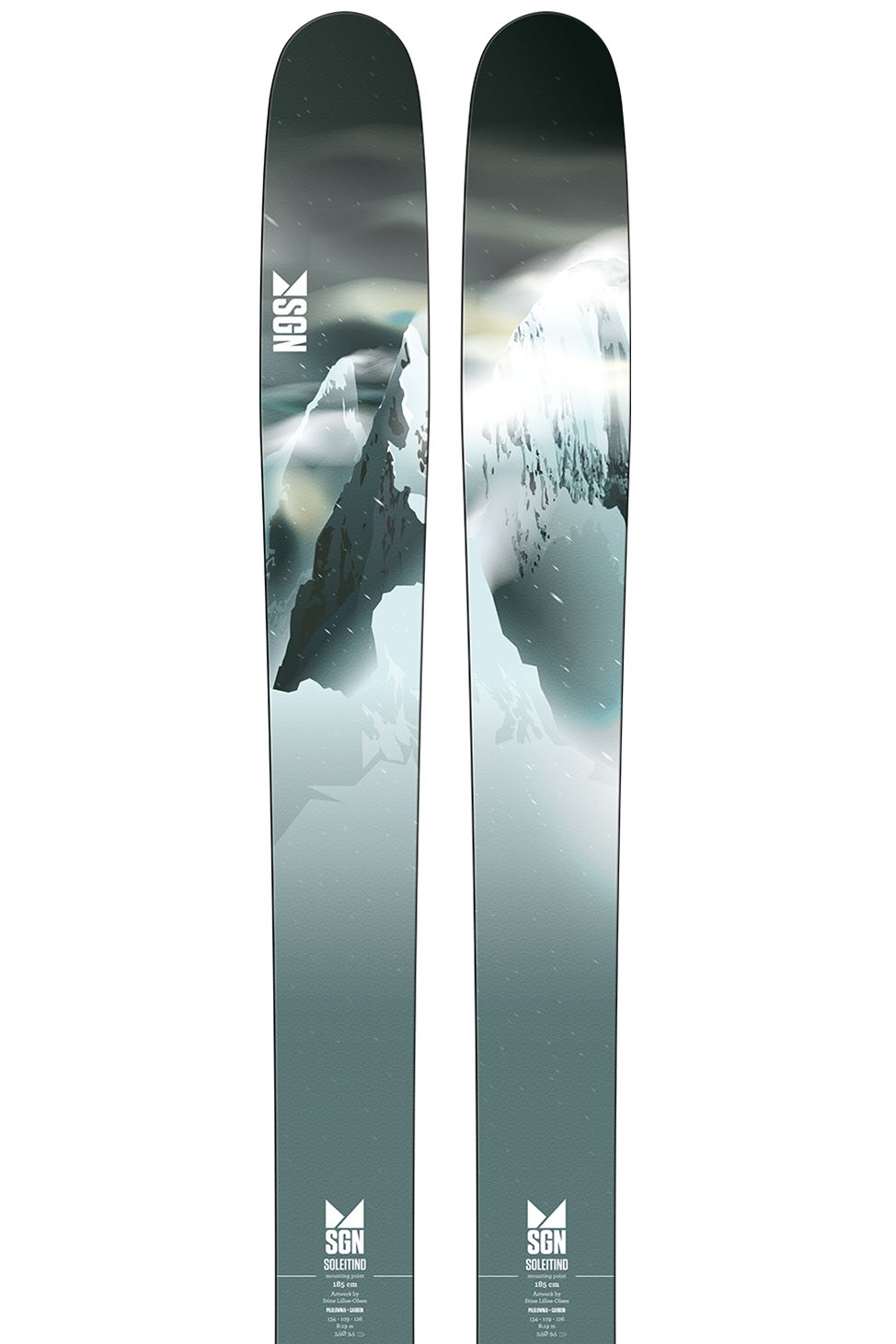 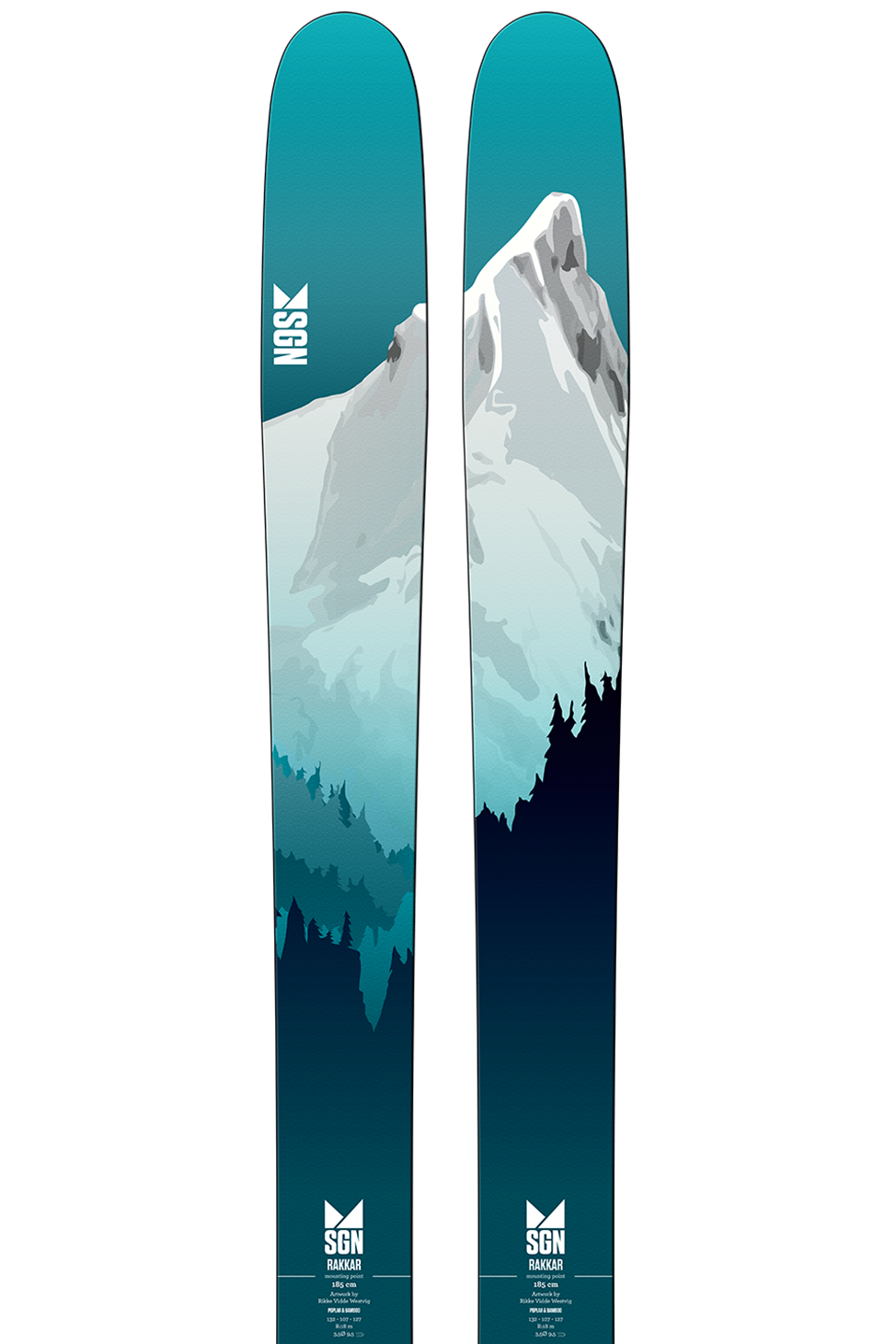